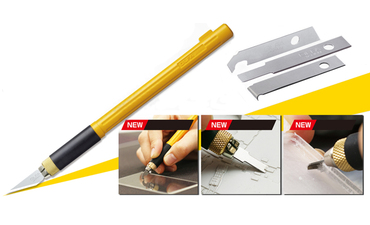 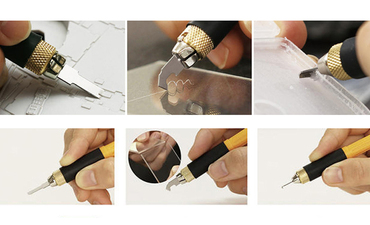 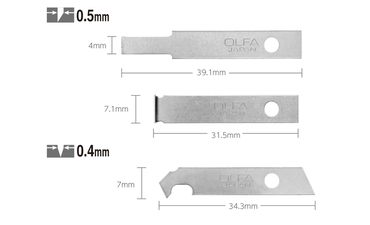 Art Knife Pro is a pen-type knife that plays an active role in handicrafts such as papercutting and modeling. With the new replacement blades released this time, it can handle a wider range of work.
Three new blades, “Thin flat blade”, “Placut blade” and “Scratch blade” will be released on Japanese market September 17 as new blades for Art Knife Pro.

Thin flat blade (photo on the left) has a blade width of 4 mm compared to the existing wide, 8 mm blade. Thanks to the thin flat blade, more precise work is possible. Ideal for detailed cutting and extrusion.

Placut blade (middle photo) is a blade that can be used to cut hard plastics such as plexiglass, pre-laminate, laminate, bakelite and even 1 mm aluminum sheet. Cutting consists in scratching with a knife several times the material to be cut along a ruler, and then breaking it along the cutting line. This blade has its larger counterparts PB-450 and PB-800 used for PC-S and PC-L knives.

Scratch blade (right photo) is a blade with a curled edge and a width of 8mm. It can be used for scraping / scraping the surface as well as deburring.

As part of the campaign introducing new blades to the Japanese market, the special packaging "157B Art Knife Pro" with a set of 6 types of spare blades will be on sale.

We have to wait for new blades a little bit - they are still on the way to our stock.